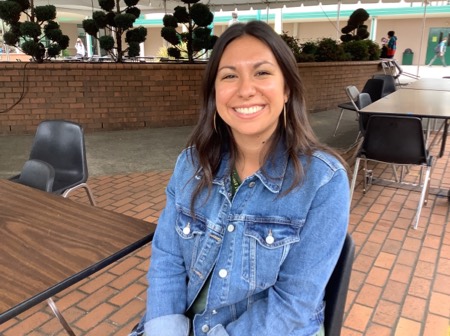 LMU alumna Amanda Montez ’15 was named the recipient of the Ignatian Solidarity Network 2022 Moira Erin O’Donnell Emerging Leaders for Justice Award. The O’Donnell Award honors young adults who have received an undergraduate degree from a U.S. Jesuit university and have demonstrated significant social justice leadership in their communities. The award was presented at Ignite: A Celebration of Justice, held in New York City on April 27, 2022.

Montez, the director of diversity, equity, and inclusion at Jesuit High School in Portland, Oregon , earned her degree in elementary education and Spanish. She recently finished her graduate degree at the University of San Francisco in international and multicultural education. Montez is bi-racial educator, and works to create systems of racial equity at work, in her research, and as a co-author of Jesuit West’s Community Organizing for Racial Equity (CORE). She talked with LMUTW.

LMUTW: Congratulations on your award. Can you tell us what you were involved in at LMU?

I volunteered at Dolores Mission, Homeboy Industries, Case de la Mateada, which is a study abroad program in Córdoba, Argentina, Ignacio Companion trips, De Colores. I also attended the Teach-In with Ignatian Solidary Network and I worked at the Loft.

LMUTW: Why did you get involved with DEI work?

I went to Xavier College Prep in Palm Desert, California, which is a Jesuit High School. I was really intrigued with Ignatian values and being people with and for others. This was instilled in me from a young age, and there were so many conversations about social justice happening: racial justice immigration justice, climate change.

When I was in working in Argentina, we worked with an agency that was trying to combat police brutality. When I moved back to the United States, I moved to Baltimore, right after Freddie Gray was murdered and started to do DEI work. I did not have a lot of experience in it, but I am biracial person and I had a lot of questions about what race and culture meant. I naturally gravitated to wanting to find those answers. I have always worked in schools that didn't have DEI programs, so I was always the one leading the charge and listening groups or classes and working with administration to try to make any sort of movement happen forward.

LMUTW: What does your research focus on?

It focuses on alumni of Nativity schools, which are Catholic schools serving populations with financial hardships, and how they transition to predominantly white high schools. My research found that it’s very challenging for them. Socioeconomics is a big barrier for our students. This was really transparent during the pandemic when students would be Zooming into class, and some of their classmates would be Zooming in from Hawaii, and they would be in a neighborhood where there is gang violence and prostitutes, so it was just a really different circumstance. My hope is that an educator realizes this and knows that they are called to radically love their students, listen to their students’ experiences to get to know them better so that they can better educate their students.

What movement would you like to see in Jesuit schools?

For me, students feeling safe in their schools is number one. Second, I think folks need to recognize that our Jesuit identity calls us to racial justice work. I don't want people to think that DEI is the next fad of social justice, but that it's really systemic and thoughtful and has been part of our calling for justice, since day one.

LMUTW: How do you feel about getting this award?

I am really humbled. I do the work because I am trying to be the teacher that I wished I had had when I was in middle school and high school. I am honored because I went to a Jesuit high school and I learned about the Ignatian Solidary Network in my junior theology class. I am passionate about my Jesuit education so it really means a lot to get this award.