When Eliza Rodriguez-y-Gibson was invited as a recently arrived faculty member to participate in the 2012 Colloquy on Faith and the Intellectual Life, she wasn’t sure if she was a good fit. “I had an ambivalent relationship, certainly at that point, to Catholicism,” says Rodriguez y Gibson. Her education had been in secular institutions, and even though she notes that Catholicism is a part of her heritage, she has her qualms with the Church.

But Fr. Robert Caro, S.J., vice president for Mission and Ministry, who had extended the invitation, told Rodriguez y Gibson not to worry—that she, because of her differing opinions, was exactly the right kind of person to attend. 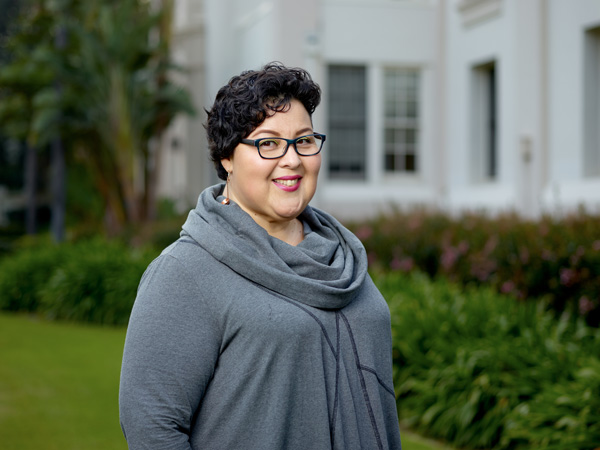 “I went and it was fantastic. Incredibly welcoming,” says Rodriguez y Gibson. Founded in 1992, Collegium is a national organization dedicated to assisting faculty at Catholic universities and colleges explore the integration of faith and reason and thus gain a fuller, richer understanding of the overall mission of Catholic higher education. Every summer, Collegium sponsors a Colloquy—a weeklong gathering—for faculty sourced from 65 Catholic universities and colleges. Participants represent diverse backgrounds and faiths and are encouraged, through keynote presentations and follow-up discussions, to consider how their academic work might intersect with dimensions of the Catholic intellectual and artistic tradition. In short, faculty members are tasked with exploring how they can blend their personal spirituality, their academic discipline, and self-reflection in an integrated scholarly vocation.

Rodriguez y Gibson interacted with a number of different faculty members in discussion groups as they delved into ethical and moral issues from an intellectual perspective. “Being able to live that synthesis of the experiential, the spiritual and the intellectual was a transformative experience,” she says. Rodriguez y Gibson and others talked about their roles, whether Catholic or not, in a Catholic university, and they shared thoughts about their own personal spiritual beliefs. “I started talking about my own religious identity, which is something that’s deeply intimate--something I would never have talked about in a professional context,” she says. “But at the Colloquy it felt organic and tied to how I think about myself as a professor.”

The Colloquy included opportunities to participate at Mass, explore different spiritualties, attend poetry readings, and contribute to pedagogy discussions. The faculty participants created a sense of community, working closely with one another to understand the importance of blending the academic and the spiritual. When Rodriguez-y-Gibson came back to LMU, she viewed her position as a professor very differently.  She realized that in a Catholic university she no longer had to think of her own and her colleagues’ religious identity being separate from their professional lives.  It was something they could talk about, and thus, for Rodriguez y Gibson, “Religious pluralism [became] . . . an authentic way of imagining the community.”  She credits the Colloquy as an “important moment” in the trajectory of finding her space at LMU.

To learn more about Colloquy, visit www.collegium.org. For more information about representing LMU at an upcoming Colloquy, contact Katherine Brown, Director of Mission and Identity Programs, at Katherine.Brown@lmu.edu.