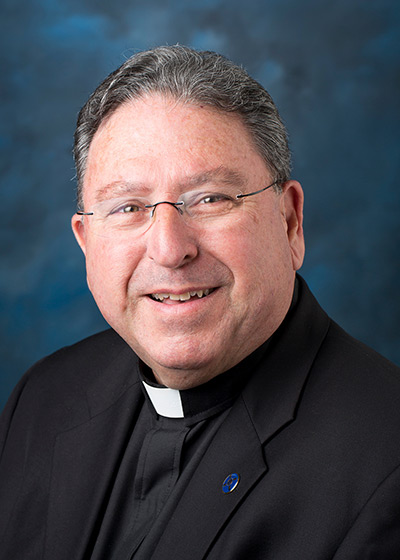 Fr. Allan Figueroa Deck is currently Distinguished Scholar of Theology and Latino Studies at Loyola Marymount University and Professor of Theological Studies. He has served in a number of academic, administrative and leadership positions. He was administrator of our Lady of Guadalupe Church in the Delhi barrio of Santa Ana, CA. and first Director of Hispanic Ministry for the Orange Diocese. He held full-time positions at Loyola Marymount University and the Jesuit School of Theology at Berkeley. In 1997 founded and served as first Executive Director of the Loyola Institute for Spirituality in Orange, CA. From 2008-2012 he was called to serve as first Executive Director of the Secretariat of Cultural Diversity in the Church at the United States Conference of Catholic Bishops (USCCB) in Washington, DC.

Father Deck is a member of the Board of Directors of the Jesuit School of Theology at Santa Clara University, of the Center for Applied Research in the Apostolate (CARA) at Georgetown University, and of Verbum Dei High School in Los Angeles. He has authored or edited seven books and published more than 50 chapters or articles on pastoral theology, Hispanic ministry, Catholic Social Doctrine, spirituality, faith and culture. Father Deck was a co-founder and first president of the Academy of Catholic Hispanic Theologians of the United States (ACHTUS) as well as of the National Catholic Council for Hispanic Ministry (NCCHM).

Undergraduate and graduate courses in Latino religion and spirituality, Liberation Theology, pastoral theology and ministry, and Pastoral Studies in Spanish

“Intercultural Competency and the Sunday Homily: in the Footsteps of Pope Francis,” in New Theology Review, March 15, 2014.

Catholic Press Association Award for The Second Wave: Hispanic Ministry and the Evangelization of Cultures (1989)